USPS suggests the address below 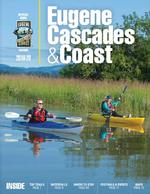 At the center of Western Oregon, the Eugene Cascades & Coast travel region stretches from the Oregon Coast, through the Willamette Valley, to the McKenzie River and Cascade Mountain regions.

Willamette Valley - The Willamette Valley exemplifies the allure of the Northwest. This valley was the inspiration for the historic Oregon Trail expeditions. Situated in the southern Willamette Valley, Lane County's diverse offerings continue to attract visitors and delight residents. Visit our Willamette Valley Wineries, or play a round on our golf courses. If you prefer to spend a day learning about the area visit any one of our 13 museums, or some of our historical attractions.

Eugene / Springfield - The city of Eugene, Oregon is a place where Bach and boot-scootin' live in harmony, where tie-dye and tuxedos are equally trendy, where small town charm meets big-city panache. Eugene- Springfield make up Oregon's second largest metro area. Located along the Willamette and McKenzie Rivers in the heart of Lane County, Eugene and Springfield contain a dynamic mix of Eugene art galleries and Performing arts, shopping and dining, sports and entertainment.

Cheer on the University of Oregon Ducks at a Pac-10 game, or create your own excitement with a white water rafting trip on the McKenzie River. Nearby, peaceful rural communities are home to historic covered bridges, award-winning Willamette Valley wineries, and abundant recreational venues. From Eugene, the Oregon coast is a short drive away, and area lakes and reservoirs are even closer for boating, fishing, bicycling, camping, and hiking. Discover all there is to see and do in Eugene-Springfield!

McKenzie River Valley - Several communities make up this scenic and recreational wonderland. The towns of Cedar Flat, Walterville, Leaburg Oregon, Vida, Finn Rock, Blue River, Rainbow and McKenzie Bridge are situated along Highway 126, where the wild McKenzie River winds its way to the Willamette Valley from the Cascade Mountains.

Cascade Mountains - Hike a peaceful old-growth forest trail. Carve fresh tracks on the slopes of the Cascades Mountains. Soak in pools of natural hot springs. Whether you seek an exhilarating outdoor adventure or a way to relax and rejuvenate, you'll discover the perfect place in this neck of the woods. The hard part will be deciding whether to stay in an area bed and breakfast, or to sleep out under the stars in one of over twenty campgrounds and RV parks. The trip through the Cascade Mountains, from Eugene or Springfield to the crest of the Willammete Pass is full of spectacular stopping points.

Eugene - Eugene is a south Willamette Valley haven nestled between the Cascade and Coast ranges. With the blue-green Willamette River running through its heart and Douglas fir forests bordering it on three sides, Eugene is nicknamed "The Emerald City." Together with neighboring Springfield, the area has become the second-largest residential area in Oregon.

Willamette Valley - The Willamette Valley is the name of the broad, fertile swath of land -- Oregon's "fertile crescent" -- swooping from Portland south to past the city of Eugene, to the Rogue and Umpqua valleys.

Cascade Mountains - The Cascade Range, which runs north-south from Northern California to Canada, is known for its massive, snow-capped mountains and the rich temperate rainforests on their western flanks. Mount Hood (11,239) is the highest peak in Oregon and the most frequently climbed major peak in the Cascades. It is also home to five developed ski areas. Crater Lake National Park, Oregon's only national park, falls within the range.

Select one or more Free Visitor Guides below

Complete the form to receive your guides by mail 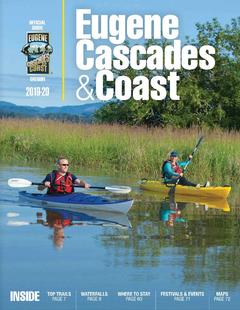 Southwest OregonEugene is a sleepy town known for its laid back culture. It is close to the famous Oregon Coast as well and home to several world-class wineries.
Request this Free Visitor GuideRequested! You're all set! Request a few more Visitor Guides, or complete the form below to receive your guides by mail.

Northern OregonFrom majestic Mount Hood to the green and sprawling Willamette Valley, Oregon's Mount Hood Territory is a place to be explored. Enjoy conquering historic hiking trails or take on Mount Hood on skis for an experience not soon to be forgotten.
Request this Free Visitor GuideRequested! You're all set! Request a few more Visitor Guides, or complete the form below to receive your guides by mail. 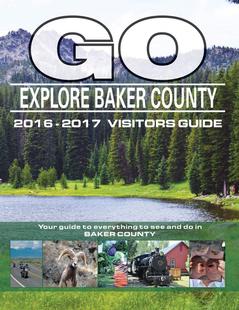 EasternBaker County is your Base Camp for experiencing Eastern Oregon. Base Camp Baker answers the question: "what is there to do in Baker County?" If you're in the market for a little time away from it all, we invite you to visit Baker County, Oregon, where Our History is Your Story!
Request this Free Visitor GuideRequested! You're all set! Request a few more Visitor Guides, or complete the form below to receive your guides by mail.

Willamette ValleyWhile traveling to Oregon be sure and stop by Corvallis in the very heart of the Willamette Valley, near great outdoor recreation and within 90 miles of Portland and the Oregon Coast. Come enjoy great cuisine and fine local wine, listen to some live music, browse the farmers market, or stroll one of our many beautiful parks. Corvallis is a place made different, come visit us.
Request this Free Visitor GuideRequested! You're all set! Request a few more Visitor Guides, or complete the form below to receive your guides by mail.

Utah, Colorado and IdahoSince 1966, Holiday Expeditions has provided trips to the most spectacular landscapes on earth. Today, we offer whitewater rafting in Utah, Colorado and Idaho, on the Colorado, Green, Yampa, San Juan, and Salmon rivers.
Request this Free Visitor GuideRequested! You're all set! Request a few more Visitor Guides, or complete the form below to receive your guides by mail.
Thickbox test